Event 66: Will and Grace…a moment I will never forget

Where do I even start! The day went from great to AMAZING…pretty quickly. Welcome to a job that I never thought I would ever write – but suppose that’s been nearly every single thing I have been fortunate to do.

What: TV Studio recording – Will and Grace

And the story begins…

Tickets for studio performances are common in Hollywood but for this show I actually had a very difficult decision to make. Instead of going to America’s Got Talent I went to Will and Grace a show that I have loved all through the 90s and 00s. A show that was acclaimed for allowing a voice for gay community in the late 90s the show has a very heartwarming feel to it. This element was discussed widely by the warm up maestro Roger. He spoke about the impact the TV show had as everyone nodded and clapped to applaud in agreement of the impact. Also the impact the show had on gaining recognition from awards – winning everything from Emmys to Screen Actors Guild.

Before we get to that point which led to the photo. I had a general ticket, which meant there was absolutely no garuntee to gain entry to the show. After standing in the lovely Los Angeles weather I was allowed into the very secured world of the Universal Studios. The crowd in comparison to Price if Right was shall we say – no colourful tshirts everyone was dressed for a night out in London town or even LA…I wore my only best shirt I have.

I met a few lovely people who were advising were I should sit if we get a choice. At this point we got in and we went left…and boom this is when it gets interesting. The studio is broken down to three main areas. Office, Apartment and then an area that be chopped and changed to fit the storyline…YOUR NOW PROBABLY JUST WANTING ME TO EXPLAIN – HOW DID I END UP MEETING GRACE…Ok…here it goes. 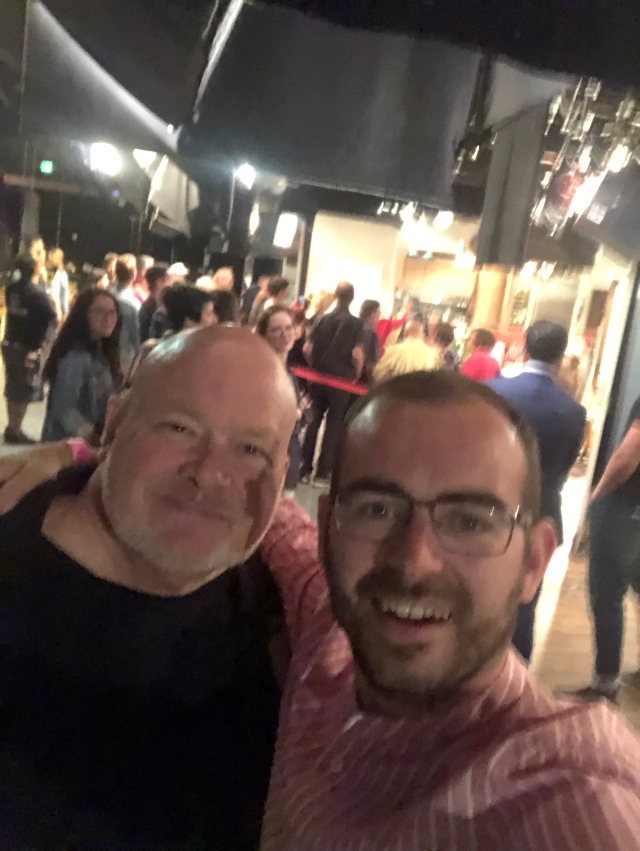 The audience, all 241 of us, sits in silence and laughter when the filming occurs and then when they are changing the scene or fixing lines on set, Roger the warm up extraordinaire, will then engage with the crowd. They ask were people are from, why they are here…and so on. It’s a chance for people to engage and get to know everyone. The Aussies of course were in the house, the French and so on…I’m shouting – SCOTTISH…but he was at the other side of the long studio so I missed the chance. At the next break of recording he asked did anyone have any questions…now here is the exciting part. My arm shot up! BOOOOM UP! Yes sir what is your name… “Matthew…” in the most Scottish accent I could do at the time…”Matthew…your from Scotland…come on down…” Literally down I went. Everyones cheering and clapping the music is on full blast and I just got lost in the moment and began to dance – I spun, I moonwalked (well attempted) and I used this opportunity to just captivate – and it worked. Roger said keep going…I started shaking with excitement and nerves. He asked me a series of numerous of questions and explained what I was doing in LA so I explained my adventure. Before I know it everyone was like “awwwwww….”

Roger was amazing as he kept asking what my adventure was about and the whole crowd was now captivated. I mean lets just remember here – Will and Grace is behind fixing a scene and I’m currently telling a whole crowd about why I am going “Around the World in 80 Events”…Its about living my dream and going on a journey – as I told the crowd. The whole place was like – WOW…I was explaining this event would be part of my book. At this point a senior of the show saw Roger talking to me came over and asked what I was doing. I gave my card over and he then checked my website and was like “Well there he is…” Its was 7 minutes of my life I’ll never forget…

At the end of the show I was advised by Roger I was able to go on set after being giving permission by Steve. A lot of the audience were trying to get things signed, down on set but to get on set was only me – and I was like WOW….none of the cast was actually meant to be there. But Debra Messing had her whole family and friends – so they were getting photos as I was then told…on you go. Getting on I could hear and see Steve and Debra shouting come on Matt with her whole family laughing and clapping as I am was overcome with emotion for sure (her whole family had been in the audience so they knew my energy and excitement)! Debra was a great sport we got a photo, we got a video and Steve was like I’m filming! It was brilliant! Thank you to Steve, Roger and Debra to be on the set of a show I have watched and laughed away to for years. And also for creating a moment on my adventure I could have never imagined!

I absolutely could not have road mapped my journey of thus far and meeting Grace from Will and Grace was certainly not at all on the road map. I was meant to be at, as I said, America’s Got Talent – but instead…I went to something and experienced something that will live for me forever for sure.

You never know what will happen in life – but whatever does always take it with both hands and enjoy it!