Cycling on the strreets of the walk of fame – you mad – nope. Welcome to the event that closes streets and allows thousands to enjoy a car free environment and all people to get to places in Hollywood where they most probably never have adventure before…

Where: Hollywood (right outside my hostel…)

Tourists. Cars. Non-stop madness. Complete craziness. Buskers making an imprint on my ears at 2am on a Sunday morning. The sun rises and outside my hostel, which is on the Walk of Fame – the extremely tacky tourist place, it was silent. A complete opposite from the 8 hours prior. On this rarity and Sunday morning – it took laziness to a whole new life. Not a sound. I literally was confused as I drew the curtains and was amazed as I saw zero cars and instead marquees on the right hand side of the road. A trickle of individuals cycled as it was 8:30am. This was not a random thing – this was the set up for the CicLAvia.

Los Angeles is sciencitficially proven to be what I was classify as a “car city”. Point blank. everyone has and uses there cars for everything but it means you get absolutely no where. The metro system is pretty good however car is the main mode of transport. CNN presented a piece a few months back with one astonishing fact that LA traffic congestion levels are among the worst in the world. Lets just think – break this down. According to very scientific research LA residents and car users sit in an extra 102 hours of congestion on top of the travel time. This is 28 more than London and 33 more than Paris annually. In 2016 the population of LA alone was 10 million people. In terms of comparing to car ownership – 7.8 million people have a vehicle. This is not double numbers or anything else regarding the amount of rideshare journeys which are additional journeys and extra congestion. Public transport or transport methods provided such as taxi companies were not included. 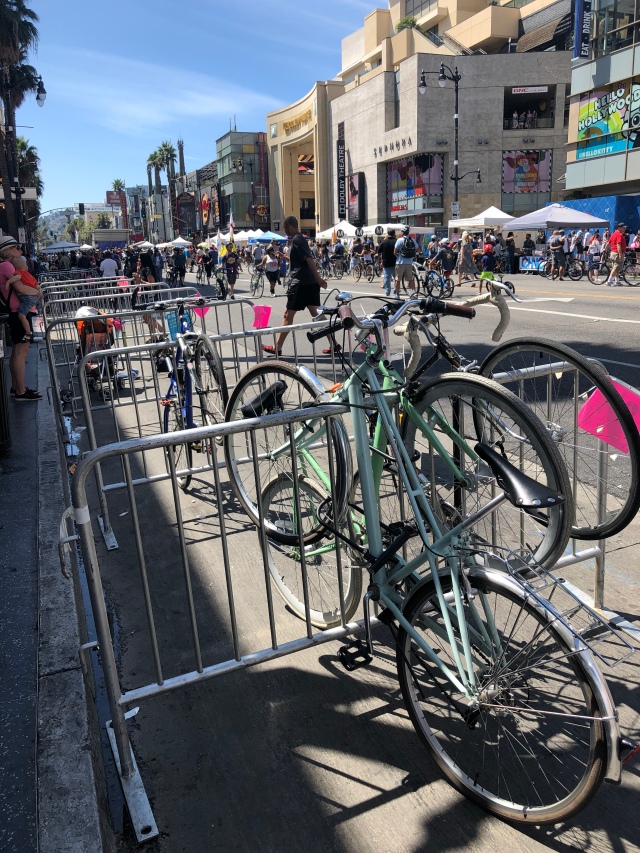 So why have I just bored you with some interesting car facts. Well, that was background on why closing down roads to cars and bringing bikes onto the road and allow people to experience Hollywood Boulevard, who most probably would never come down to this tourist trap. By 10:30am cyclists were appearing from everywhere. No cars were allowed for 6 miles in the Hollywood area – which is a huge deal. Tour buses – none. Cars and Ubers floating picking lost tourists up – none. Blocks upon blocks all blocked with the sound of bells ringing from bicycles polluting the area than cars.

The marquees that were being set up was the engagement part. Free mechanics, City Hall representation, music stages and so on. I mean the whole purpose which I have copied and pasted from the website is:

CicLAvia catalyzes vibrant public spaces, active transportation and good health through car-free street events. CicLAvia engages with people to transform our relationship with our communities and with each other.

Over 1.6 million people have approximently taken part in CicLAvia in the past 9 years – with it being the biggest open streets event in the US – WOW! Although I did not see any methods of collecting data but me being on the ground these numbers and the scale was for sure magic. Pressure due to these events have been put on creating better transportation policies focusing on the pedestrian and bike policies. But also for public transport including the metro to be used more by all for the event and non-event days – leaving legacy. One other change that is seen during the event is the fact the air quality is changed by over 20%, with decreasing ultrafine partaicles in the air. CRAZY!

To open the streets really does ensure a few things that need to be introduced. This include people discussing the event, meeting new people and telling all of their friends. I watched people cycling alone, I watched scooters or anything that had rubber wheels and was good for the environment. Thousands upon thousands were part of the event and good on the City of LA by challenging the mindset of motorists. Yes, the beeping and moaning was taken place at the road blocks because I went down to just observe and it was constant BEEEEEPPPPPP…but if they really want to do something on a Sunday. Leave the car at home – either jump a bus or a method of public transport and get down to enjoy the event. Never will 10 million plus be changed into thinking that cars are not always the best method – and instead if they can ride a bike or scooter. Get the family out from inside and get them enjoying the beautiful sites of Hollywood. It was great.

I also got to meet Daniel and the finest of LAPD officers who were aksing about my travels. I was explaining and with a photo they secured a place in my photo gallery of the book! Congratulations!

So get on your bike everyone…

Public might not buy in to this type of event – but sometimes you need to push barriers and boundaries and create an engagement and educational piece that will eventually catch up. After 9 years they have a product that’s brilliant and enjoyable to be part of – even if I wasn’t cycling.