Event 62: Pole Dancing Championships…a different type of event but important for those participating

Important information: I respected those who compete by not including pictures or anything about the event – apart from two photos that can be seen below.

Two poles. One stage. Many dancers. It was time to volunteer at the Pole Sport Dancing Championships. Yep…I wanted to go the weird, wonderful and unique events – and this was just one of them. Welcome to a blog that a year ago I had no clue one day I would write – or what my experience would be… 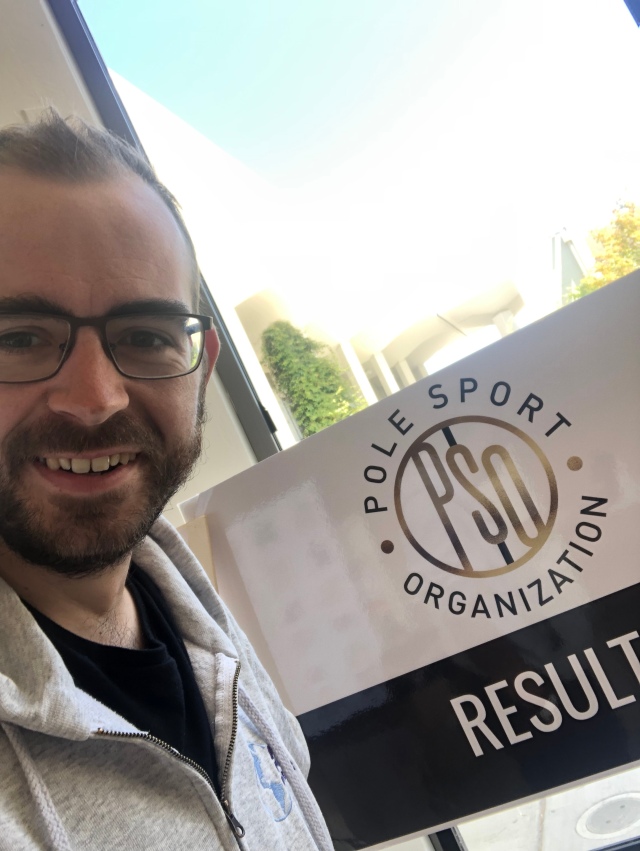 And the story begins…

A tram, a train and a missed bus…it took me 2 hours and 30 minutes to get to the venue for the Pole Dancing Championships. When I signed up I was originally going to be an announcer. However, after checking how to get there I wouldn’t be able to make my way there at 6am. So on the Sunday at 12pm I checked in (after walking through the dry heat of San Mateo) to begin my shift as a door monitor. I laughed as I was giving my “thank you gift” a $5 voucher for any of the stalls today – which were all pole dancing equipment – mainly outfits. I politely declined. After that funny but awkward moment I was advised to go to the door were I would take over from the person volunteering. I was met with a smiling bubbly person who advised me all about the sport. For 10 minutes they advised me all about the sport – I was intrigued. She told me all about the categories and the different poles – one was static and one was spinning depending on the moves…I mean – WOW.

We spoke for a while and she was a fountain of amazing knowledge. I was then left to fend for myself on this door but also I was able to appreciate the competition. I was advised that I had arrived just as the more fitness side of the competition had finished and it was about to get quite – shall we say sexual – as the photo below of the program shows.

I laughed but then started to appreciate for a lot of people this was a hobby and for them to compete was a huge task. Everyone supported each other (apart from a few people – there was certainly some beef between different dance schools you could feel it in the air). The strength they had and the moves were quite incredible. And heres a fact…it was not only women competitng. There was men. I was liked a few times – so are you competing at the next competition? Me…oh no I couldn’t possibly – I can hardly left my leg knee height never mind round that pole.

The purpose of going to the pole dancing competition was to include an event that people may not have expected me to include in the project. I wanted to appreciate events that allow people to come out of their comfort zones. What did I take away from it? Well, its community and the community feed in to making a business successful. The people who run it have a product that allows people to consume and push their new skills and abilities for future gain. Once they are in – they will for sure not want to stop and probably they will tell their friends. So the business is successful for the long run – clever. Very clever.

One story that was funny was when I was standing at the door as the best door monitor that the competition has ever had I was met with two people who asked if they knew if there friend had been on. Checking out the schedule I couldn’t see her name. Now remember most of the dancers were purely fitness. They were then met with another voice who advised “do you know what her stage name is?” I laughed to which she responded – no I just work with her…the two woman obviously were not part of the community of pole dancing but not just that I don’t think they knew what they were about to experience. It was a legit big championships – so it was a brilliant event. However, as they sat and one of the official Pole Sport Organisers figured out who there friend was – there friend walked on…

They clapped and then the hilarity for me began. The woman took out her phone to capture the proud moment of her friend performing.. The phone stayed locked in the woman’s hand – without being used once as the womans jaw was kind of oooo. I think she was quite impressed and baffled. Her friend who obviously was being introduced to a new element of society was just as quizzed and very much – speechless. They had entered as the “sexy” rounds were beginning. She was a brilliant performer and needed extreme strength for the moves she was partaking – but I think for her friends…it was all a whirlwind of emotions and never was captured on the phone.

I wonder how Monday morning coffee was? May I add they left straight after she performed…either they had a knitting class to get to OR they were rushing to spend my $5 voucher at the pole dancing pop up shops.

Events come in all shapes and sizes – and poles. Pole Dancing is not a seedy leisure activity it’s the ability to give those who want to engage a safe space to enjoy, be part of a community, develop friendships and be the best – with all of that just on one weekend in San Mateo.