On a Friday night when it’s traditionally date night I dawned my best shirt, grabbed a packet of haribo, had a waffle, got my ticket for George Ezra and headed to what I can only describe as a performance I didn’t think would be so epic…

George Ezra in Brussels as part of his European Tour. It was in the Forest National multi purpose arena 3.4 miles from the city centre of Brussels on the 10th of May.

George Ezra has become quite a name recently and now is growing in popularity around the world. As I got to the venue I didn’t have really any expectations of what to expect or feel. But instead I was going to be focused on understanding the crowd. To get there was easy…well…As part of your ticket you got free transport – epic eh – wish more events would take that into consideration. Using a code I got my ticket sorted. However, a freight train had just derailed so sadly – it wasn’t to be…instead from the station that we stopped I meandered the streets of Brussels. Arriving at the venue – there was queues for pizza, hotdogs and a venue waiting for me to analysis. One thing I had to do before was to get my ticket printed. All tickets had to be printed from peoples phones. Now – the reason for this was simple. The scanners don’t pick up the barcodes…I was kind of a bit puzzled that why in 2019 the venue couldn’t move to create a process that the barcodes could be scanned. But suppose some people see sustainability as important in events and some people just see it.

The crowd was mixed. Mainly it was couples. So I mean I fitted right in. It’s funny going to all these events myself I’ve now became a custom to just standing and everyone thinking “oh he must be waiting on someone”. Nope instead I’m writing the greatest blog in my head. The venue was multi purpose and it wasn’t overly fancy – but it does what he needs to do. Inside after a basic “hello” I strolled inside and was lost. No staff where inside the venue but I started to figure out something quickly. Everywhere was general admission. Literally you could sit or stand. Amazing eh? Well apart from the people who were stuck at the wings not ideal. But it was an interesting concept for 6,000 to be given the choice. 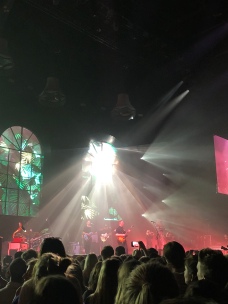 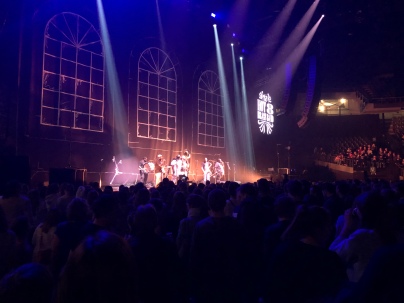 The crowd was starting to grow as we arrived to the warm up act. Now, usually warm up acts are ignored. But oh no – not the The Hot 8 Brass Band. They were moving and grooving and starting the interaction early to ensure that for George Ezra the crowd were higher than a kite. And it worked. Hands up, repeating what performers were saying – all methods that events create a platform for audience to create there own event and immediately create an engaging immersion and memorable experience.

Brilliant. I thought. Then it was 10 minutes. The background music was playing. “I’m coming up….” “Robbie Williams” and some other typical Friday night Glasgow 50th birthday party music was playing to get the feet moving – and oh did they move. Then…I don’t know how to explain the next 80 minutes apart from WOW!!!

You ever just not had an impression of a performer. Well…yep. That’s what happened to me. He walked on to a crowd who were screaming like he was one of the world’s best performer – by the end of the night I had that same impression. He’s technique in story telling was fascinating. He explained each song. He paused waited for a reaction. Really he knew how to play the crowd. He knew how and what to do to give the crowd what they wanted. Events are all about value and memories – and he was over the value and creating thousands of memories.

The staging helped with the creation of the event. Three large lamp shades were above with three bay windows behind and a grammar phone, carpet and other small pieces that would create a living room. He was making people feel at home. And yes he did that. The light show on the production element was brilliant. Different colours were linking to the different moods being created. Slow songs had a lovely white and soft pastel colours but then Paradise and Shotgun you would have thought you were being warmed up for a Friday night Rave.

As a side point – concerts worldwide have a social and economical impact on the world. In the uk along the UK Music Industry was valued at adding £1 billion to the economy in 2016. In Ontario a study was done to widen and push forward the live music industry. Findings found that live music builds tourism, employment, brand building and a positioning for music to be known in the world. This in turn led to many concerts arriving to Ontario and supporting the industry.

His overall performance was one that can only be explained by using his songs. He transported me to “Paradise”. Along the way he took he to “Barcelona” and “Bucharest”. He tried to “Blame it on Me” while he also told me to “Hold my Girl”. I tried to “Listen to the Man” but there was too many “Pretty Shiny People…”

Also – one interesting thing was he told everyone how he wrote the album. It was an amazing story – which you can read in my book next year.

Music concerts are the same old thing. Performer and crowd. But you add a dusting of charism and unique engagement it creates a showstopping performer.