Event 26: Baseball…Its A HOME RUN…actually no the home team got none….

Baseball match in Japan – it was a must. Of course I would need to experience a baseball match and thanks to my friend Sam (whom I was staying with) I got to experience just that. Here is the story of how sport in Japan was so much more than just sport.

As part of the Tokyo Series it was the Swallows VS Giants both Tokyo based teams with large followings. It was a home game for the Swallows in the Meiji Jingu Stadium on the 23rd of April. Welcome to the analysis of how baseball was the perfect event to finish up on my adventure through the very traditional and cultured country.

Arriving at the gates already I could be at any sport stadium. Sport merchandise, food on sell, entry with paper tickets and in we went. But there was something I loved. Most men their swallow baseball sports wear over their collar and tie and suits. Carrying there brief cases and looking extremely smart – work for them had just finished and straight in to enjoy a night of baseball. I was in awe just watching everything going on – except the sport. I was fascinated by the American influences but with the Japanese stamp (more about this in a moment).

The place was packed, although not sold out, the stands were having vibrant conversations with each other as every so often a stray baseball would fly over the protection netting. The whistles would be blown as the security guards would run to where the ball was landing. Everyone would have there eyes on the ball that was propelling through the air as the screams would go quiet for a second to see if the person who was below the ball would catch it. If it was a bounce it would be a awwww….but if it was a catch there would be a localized moment of applause. And that person then had a souvenir to remember what didn’t hit them.

Every so often an Americanised voice would come over the speakers in the form of fan engagement…”GO GO SWALLOWS”….three times this would be repeated. No kiss cam in this stadium but there was two bands. Yes – both sides had a large following of “fan zones”. Due to the fact it was a home derby the noise was constant. The bands would strike up. It was similar to a college atmosphere produced in America and even with around 15 cheerleaders and a gymnastic mascot who was actually a very good dancer! It was basically a small production – but when there was thousands of people in the stadium. The atmosphere was great and I keep thinking when I go to sporting events on my journey – why people construct there own entertainment. So here is some theory behind this. 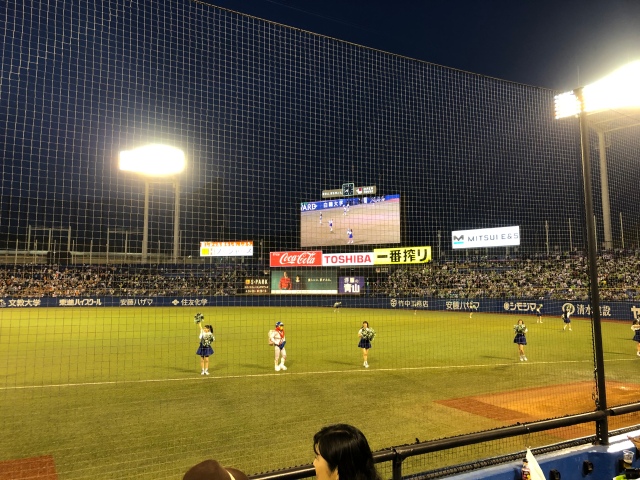 People want to be part of the event. If they cannot swing the bat they will make noise to add to that moment. They were cheer. They will sing. They will engage with what the sport team allows them to engage with. They have the swallow umbrella dance. Although, this is produced by the sports team itself fans have the choice to whether thy want to take part – and they do. Everything is created to be additional but sometimes its actually the main psychological reason for people to engage with the sport. My argument here is those that were in there work gear, enjoying a beer (or two), have a membership card, buy chips and chicken are actually purchasing the experience rather than the sport. Yes, lots of research I am sure says this and people more experienced but on this journey I see something that needs to be worked on by UK sports team – what is the package being sold. I mean the score was poor. The match was over in a record time – but the experience was special because of the experience being packaged and the buy in that the fans have.

Membership is a big thing. It’s a sense of community and there is a lot of research conducted with how sports clubs are moving away from “sports activities” and moving towards community activities. Community activities are about gathering the family of fans together. This results in a spirit that is not segerated to those who play sport but actually for all. This brings many advantages – financial gains, positive psychological engagement, longevity of the club for the future, reputation and so on. This is what I saw. I saw a club that has packaged something special for everyone to enjoy. And enjoy they do. They had electronical machines that once people were in the stadium they approached the machine to click and collect there points. Clever. It was building up points that can be used for future activites.

Food was a big thing. It was a weekday. It was a time that everyone needed food. Beer was a huge thing. In very bright uniforms and very short skirts as such female only hawkers walked around, up and down the stadiums – lots of them – selling different types of beers. As they would get to the bottom of the stairs they would bow to the section who were watching the baseball match and proceed to move with a straight arm with there money intertwined through there fingers. I was in awe. 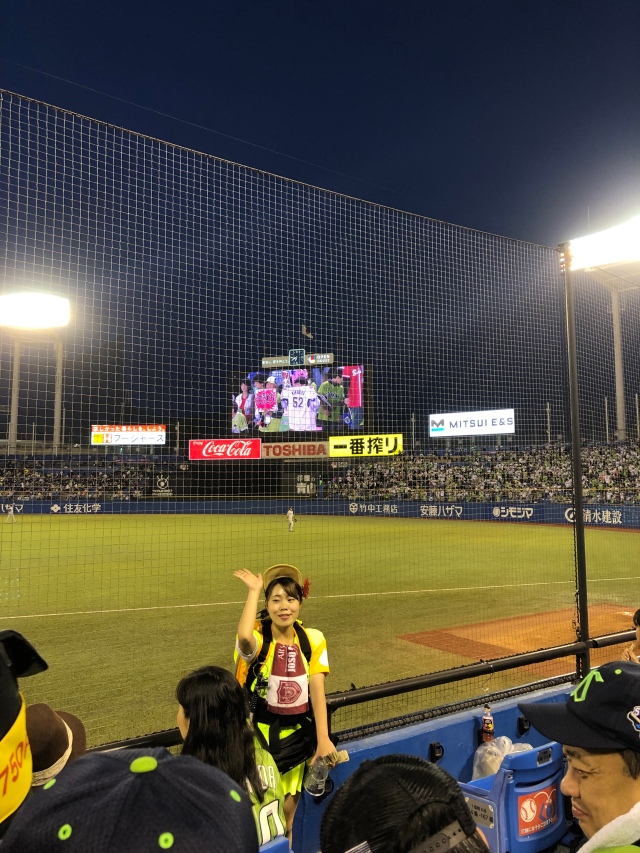 Sport whether it’s a cultural or political has many differences around the world. But passion and fan enjoyment will always be present. We live in a world where music and sport are two of many things that bring joy to this world – and long may that continue.