Thunderous drumming was pulsing my ears as I arrived at the Narita Drum Festivsl. Welcome to the world of another event…

Narita Drum Festival was 31 years old and between the weekend of 13th and 14th April it was the place to experience something cool. Groups from around Japan had made the journey to the most interesting and the most amazing drumming event I had experienced. Held in the town of Narita it was a long distance from Tokyo. But so worth the journey!

My ears began to tremble as I watched the tremendous energy seeping and flooding from stages routed through the area of Nareta. Just a few miles from the airport this town had a festival that was the combination of 800 drummers (1,500 performers) and the area coming alive with stalls servicing lots of various Japanese cuisine and Japanese items for all attending to buy into.

Walking around the site I was part of firstly a unique site plan – which was in the shape of an eel. In further investigation this was because of the area having 300 eel shops. However, this wasn’t the main attraction of the event. Taiko drums were the various drums that were being beaten as well as wooden flutes, cymbals and an array of other instruments being played – that gave the hairs on my arms stand at times.

The one thing I want today’s blog to really focus on is – passion. At events performers give passionate performances, events evoke passion through consumption etc. At this event each hit of the taiko drum was not just about making music but it was a passionate demonstration of culture, tradition and musical ability. It was all an eye opening and actually quite a thing to see and hear.

Why do performers play is a question that I was asking myself when I was walking about. For many at this event they were involved because they were part of the community, it was their school band or a band they had been part of for years gone past – but also this was a destination for many to get to in their taiko drum career. Another reason would have been the enjoyment that they get. It was constant smiles even after they are drumming sidewards, screaming and looking as though they were going to collapse they were smiling. It was real. It was fun and for them it was a moment to showcase what there talents were all about. 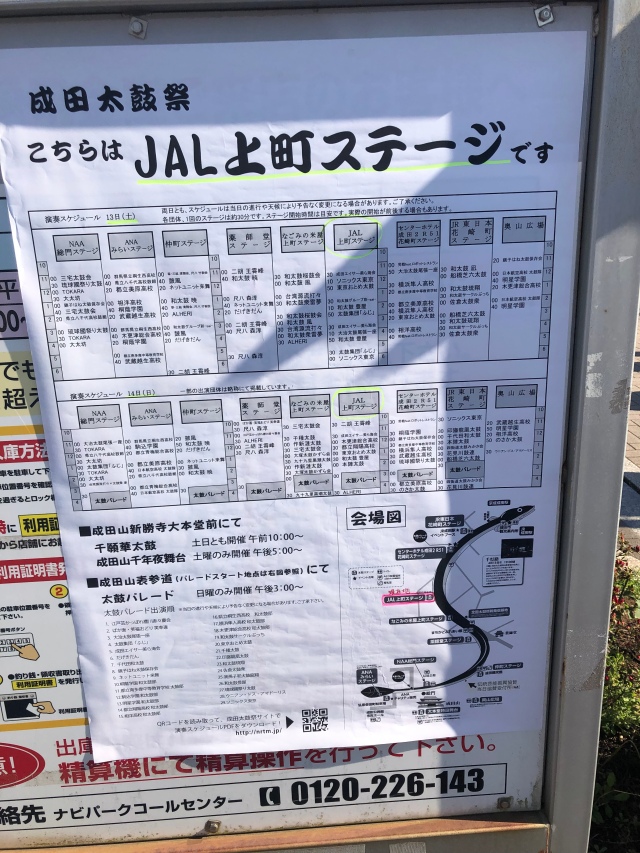 The center focus of everything was the Saturday evening concert that was held in front of the shrine. At 16:30pm the crowds had arrived and already it was full. The rehearsals had began with no drumming but just simulation of what it was to drum. This was building the excitement for what was about to occur. The sun was beginning to disappear as the noise began bang on 17:00pm It was tremendous and musical abilities.

Anything else happened at the event?

In 2018 200,000 attended the event. This means those attending are there for the best event – which means the best music. The website states there is approximately 1,500 performers with 800 of those drummers starting off the festival in the Narita Yamadai Main Hall of the Buddhist Temple. With one beat of the drum it all begins. This event has 8 stages with a timetable that was exhausting just to read.

The stages were all sponsored by different major cooperations including ANA (airline company) and JR East Hanasaki-Chi which is sponsored by Japan Railway. It had a local but yet corporate feel to it. For me, it’s packaged tourism – but it worked. It wasn’t false it was real. It wasn’t too over marketed it was natural. It was busy so it works – people were spending. The area benefits so really it does what every event in the world needs to do – get people there and make it work! What is the central purpose of the event – showcase music and add money to the local economy – job done.

Drumming is more than music. It’s social, culture and a way of life that can give the world a noise to be enjoyed and celebrated.