Event 21: The Penis Festival – Read the blog to experience this massive spectacle…

The Penis Festival – I am sure you laughed when you read the headline but this event has a deeper meaning and a background that dates back to the 17th century. Welcome to the blog that was a must on “Around the World in 80 Events”…Welcome to Kanamara Matsuri (The Penis Festival)

Event number 21 was the Kanamara Matsuri held on the 7th of April. Organised by the elders and members of the Shinto Religious community. An eye opening, real traditional event that now has the world descending on an area that never sees so many tourists – apart from when this event is on.

Setting off early I knew from researching for 8 months that to gain a good vantage point I had to be there early (approx. 50,000 attend). This moment was one of the main reasons I was in Tokyo and for me I was not missing one second of it. I arrived at 8:30am after an hour on the train and I immediately walked to one of the areas of the event. Only about 200 people were milling about mostly all locals setting everything up. The large mikoshi (the penis statues – portable shrines) were positioned with rope around them. Locals were jumping in and out to get a quick photo and being welcomed by the Shrine Elders. It was at this point I asked a local Tokyo resident to take a photo for me – he said yes go in…immediately the elders shouted to him “he can come and hug it…” Now – this was 8:45am and I was staring at a 2 metre pink penis – but actually the symbols were so much more. With my photo completed with one of the elders I thanked them and I then stood at the front watching in awe. I watched as crowds and crowds of people arrived peering for a spot at the front. It wasn’t even 9am and already the place was packed. The entry for photos was over. It was time to get ready. 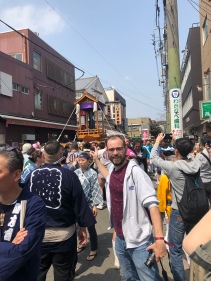 I was fascinated to watch the preparations by the locals who were taking such care of these mikoshi’s as they arrived in there pants. Yes – all men part of the event were in there pants (I did some very eye opening things…) But as they cleaned the wood of the mikoshi’s, welcomed each other and got ready – the moment was arriving. However, there was something as I looked around me. The crowd was changing or being altered. Tourists upon tourists (many Americans – hundreds to be honest in large groups) were arriving and suddenly the event being “slightly invaded” by paper penis wearing and pink tattooed tourists. But this event had a deep cultural and historical significance to the area. And let me explain…

Dating back to the 17th Century prostitutes would pray at the Kanamara Shrine in the Kawasakia area for protection against sexually transmitted diseases. Two gods in particular are prayed upon – Kanayamahiko and Kanayamahime because of a myth to do with healing a Shinto goddess who gave birth to the god of fire. Apart from this story there is other myths but I’ll let you check them out. The event was a celebration within the Shinto religion and before the event began each mikoshi was blessed by a priest from the community, which was just amazing to watch. The hilarity of the locals standing in there nappies and traditional outfits disappeared and it became very serious and extremely respective as the priest using branches and water blessed the mikoshi. Due to more people learning about this event globally it had became “quite novel” and a must experience within the backpacking tourist guidebook. However, it was more special when the Penis shaped lollies were put down and backpackers took off the tourist tinted glasses to see the religious meaning of this event and also now the positive impact this event has. The penis is a symbol of fertility but on top of this the event aims to raise money for HIV Research and future campaigns. The pink penis is carried by men in drag and is called “Elizabeth”. Money raised from the event goes to HIV/ Aids prevention and treatment. So although hilarity is the main reaction this event is about spreading the message that affects millions of people globally but locally in Tokyo and Japan in part this event is used to address and educate. 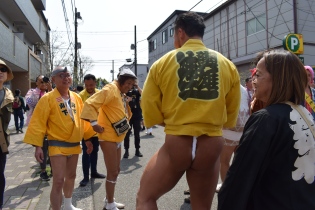 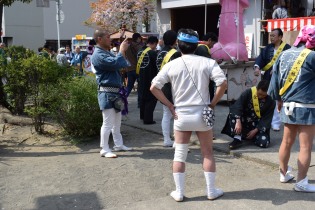 Since we have now laid out just some of the history I have learned from reading into the event prior arriving and the serious side of the roots of the festival I can get back to sharing my experience and my thoughts. As the procession began at 11:30am with more and more people wanting to catch a glimpse and say “I was there”. Within the space of 3 hours of being there I had now made two amazing friends. One from Japan and one from Netherlands we were all there for the same reason – to experience something quite spectacular and to snap photos but also discussing our appreciation for the event – it was brilliant to gain insight into other peoples opinions of the event.

At approx. 11:30am the first mikoshi (portable shrine – black penis) was lifted. Now, at this point I must add in that suddenly a camera crew from England arrived and some American tourists stood on top of the shrine walls to watch the event. Basically it went from the locals preparing for something that they had worked on all year to now people jumping in and forgetting “respect” (which Japanese people have an absolute abundance of) getting a bit of the action. Although, I am there to immerse in the event – it’s about respecting the locals, the space and the event – and thanking them for allowing you to be part of it. But that’s all I’ll say – but I did get quite upset that backpackers, tourists and others from the western world feel they have more authority than others in this world and this event. I asked myself a few times I wonder how many people before the event had researched the origins, the meaning of the shrine…but suppose that’s what happens when it becomes of the “worlds most unique festivals” to attend and a “before you die” experience…its good for the area I suppose for tourism. I do support 100% tourists coming and it was only a minority who were just disrespectful. I think in 5 years the event will double in size because everyone will want to experience it – which I don’t blame them. HOWEVER, I think its about respecting and learning about the event. Ok – Back to the event…

Noise. As each mikoshi was paraded through my two new best friends and myself scrambled through side streets to get in front of the procession to capture different unique moments of the event. Constant chanting was coming from the 30 people who were carrying each mikoshi and also constantly changing because it was so heavy. The noise was probably to ease the pain of carrying this wooden object through crowds of thousands of people. Streets closed, people out their windows and you could not see the pavement for now the hoards of people lining the streets. As you can see in the videos and photos this was not a small task to carry this mikoshi through the streets. Team work was the key to carry and get to the end site. Each person would bounce at the same time collectively wear shoes called tubby. Each member of the team were supporting each other – it was just amazing to watch. The energy coming from this pack – who were mainly male but some woman were present – was outstanding to observe. 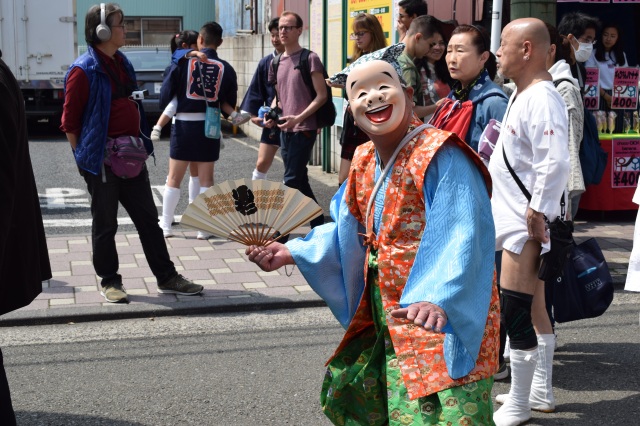 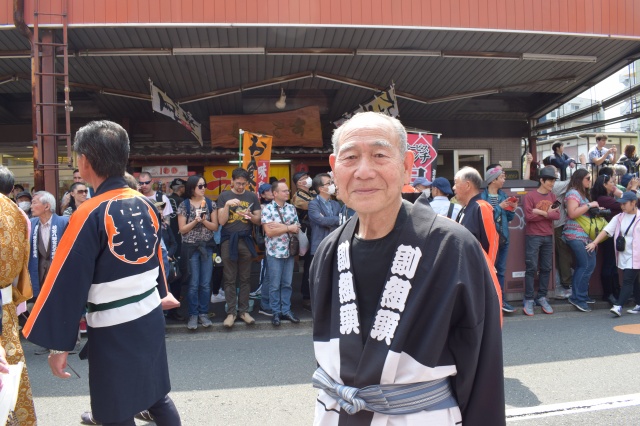 The route must have been about 2km long. Police closing the streets as the end site was becoming closer and closer. The end site was the destination for those involved carrying the three mikoshi’s to have a break and a beer. Massive emphasis on drink at this event, which is part most probably due to the demand from tourist’s as they will happily drink at the festival and spend money. Everyone had something that could be shaped into a penis – literally – penis magnets, sausages, lollies, t-shirts, hats – you think of something it was probably plastered with a penis on it.

I could write so much – from how people consumed the event, the lack of understanding and respect for the Shinto religion, purpose of the event, enjoying learning from the locals…but your’ll be able to read all in my number one best selling book (which is still be written, get a publisher and proof read…) out next year…

The photos tell a story of happiness of the locals who were so proud to be able to share this moment – and I am so pleased I could experience it. They are the most polite, respectful and willing people.

To conclude – culturally events have back stories which are fasicanting to learn about before going. To respect the events origins and those that organise the event is important – so the need to read and learn is important. If only all tourists appreciated this – there wouldn’t be moments that would cause some cringe. Again only a minority.

This event was a must for me to include it in my adventure because this embodies exactly what I am trying to understand. What is an event? Well…this event did just that – the event is more than just carrying a pink and black penis through the streets. It has become a tourist attraction, educational tool and raises money…so thank you Penis Festival you were more than just an experience…