Asia…the unknown part of the adventure

This was the part of the adventure that I did not know what events I would be able to attend or whether I would be doing anything apart from relaxing. The first part of adventure has consisted with Indonesia, Thailand and Vietnam. Instead of being a good tourist. I wanted to use some of the down time effectively.

Firstly I wanted to reflect and then I wanted to be productive. I wanted to write hundreds of emails. I wanted to capture everything I have seen, experienced, felt and so on…As I arrived to Jakarta I had absolutely no idea what I was about to experience. I deliberately didn’t want to read anything about the city because sometimes that can give you a certain expectation of what to expect and experience. Instead I wanted to go in and just enjoy the adventure. Well…I did that for sure starting off by walking 2.4km from the train station to my hotel. On the map it looked closer than it was. However, it was great to feel the streets. Literally I was walking along no earphones feeling the vibe and also watching the locals look at me thinking – who is this guy walking with two suitcases on his back.

Jakarta ended up becoming probably so far my second favourite city – a close second to Christchurch. It was a surprise how much I loved it but I really started to understand the city. I started to enjoy the city and feel part of the city. I think when you’re a tourist sometimes you can move away from really what the city truly is and instead focus on the tourist packages which are apparently authentically created.

I then went to Bangkok. Now, immediately I just wasn’t a fan. Didn’t enjoy it at all – I actually wouldn’t recommend anyone who wants to experience this part of Asia to come here. Its seedy, its dark and for me I just wasn’t really feeling it. The city is globalized and very commercial. It’s got shopping centres coming out of every corner and its well and truly a magnet for tourists and needs tourists to survive. The traffic – chaos. However, from an events point of view – this place has opportunities coming out of its pores. The Impact Arena is an example of a successful leisure destination that has a shopping centre, 11 exhibition halls, 3 main arenas (with large capacities), two hotels and its 13 miles from the town centre – but its always full. I was honoured to get a tour and really this for me was why I am doing this trip. To meet people, to see things and for me to learn. The tour was 4 hours long and featured a lovely lunch of which I had to roll in to my taxi…The next night I experienced Maroon 5 – loved it. Love Maroon 5 so it was perfect to see them while on this adventure.

Now – it was off to Chiang Mai. As soon as I arrived. I LOVED IT! Absolutely loved it. Its much more peaceful than Bangkok. Its whole atmosphere was not just tourism it was locals, it was full of culture and I loved it. For 4 nights I relaxed in my most amazing hotel. If you are EVER EVER EVER going to Chiang Mai you need to stay at My ChiangMai Boutique Lodge. As soon as I arrived water and a hot towel was waiting for me. I was then introduced to the city for 20 minutes by the manager with numerous maps to share me where everything was. When have you ever had such a thorough introduction to a city from a hotel manager or even just the reception team in general. Usually it’s a “we need a deposit.” Instead the service was outstanding and the beginning of this trip was outstanding. I loved Chiang Mai so much. I walked through the markets about 10 times a day. I loved watching the locals just making the food, chatting, socializing. There was certainly something special to just observe the locals of a town. They all have character and for me that’s what life is about – sharing memories and being a character. But one thing was absolutely clear

For people in Indonesia, Thailand and Vietnam every stall I have went past in a market has a daughter, son, grandfather, grandmother, father, mother and so on…its all about the family. Everything is family oriented. I loved it. I love that culture in Asia. Grandmothers would sit cradling there grand daughters or grandsons while the mother would stir the pots on the hobs on the side of a street corner. 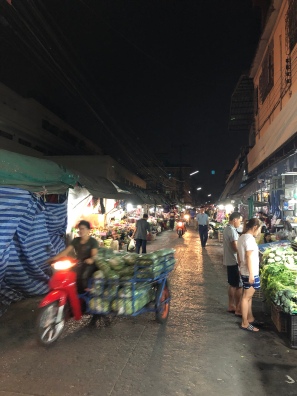 This was Asia. It was chaotic for westerners but it was home for millions. The pace is loved by those that live in it – so why would anyone ever want to change it. The noise of scooters will be something I don’t think I can ever unhear. But this is what makes countries and an area of Asia unique – cultural traditions – planned or unplanned.

I will be in Asia for the next 5 weeks as I venture to China, South Korea, japan, India, United Arab Emirates and Turkey…but I know that what I have experienced for the last 3 weeks will be always one of a kind – and you know what I would not change it one bit.