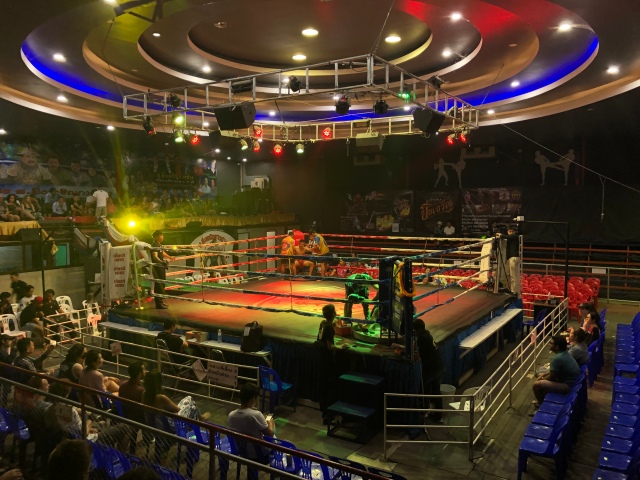 At 8:30pm my private Tuk Tuk driver flew towards the hotel – I thought oh well it’s been a great trip! I was excited – not for the tuk tuk that’s for sure but to experience an authentic cultural experience.

Muay Thai is more than a sport in Thailand and there was a few local clubs against each other in the boxing stadium on the 12th of March. And so I was immersed watching not just this fight but it is lifestyles.

The Muay Thai spectacle. The event was billed as a must see. And don’t get me wrong the fighters were fully capable of holding there own in the ring. However, the event was a tourist trap. Most of the spectators were 95% tourists and the only ones to pay admission. The rest were locals who were waved in by the “security guard” who I think was actually third on the bill.

Three tears of seating areas. Standard, Ring Seats or VIP – which had unlimited supply of drink. The only people there was a group of backpackers who got nearly thrown out for going into the ring before it all began. And when they did go into the ring taken in by the promoter they, in my opinion, they disrespected the ring by running about like 5 year olds in primary school after stealing each other’s tuckshop – soon the 5% weren’t happy. The respect given to that ring by each fighter was admirable and then unfortunately it was torn apart by a few intoxicated backpackers thinking they can recreate a seen of.Backpackers remember culture before thinking of the Instagram.

The event started with the National Anthem. After that – the event began. I was oooong and ahhhing at each hit – really I was probably the worst person to be at a Mauy Thai fight. 2 hours of watching between my fingers and gasping for my breath as the fights got more intense.

The first fight ended up with the trainers of the other fighter jumping in to put the fighter into the recovery position. Great – I thought – what a great start. He was ok. I think he saw a few stars as the “sports presentation” began and the lights were dropping like we were in Ushuaia in Ibiza (famous nightclub). He was ushered off – rolled out the ring and caught by a “trainer”.

Talking about production I was impressed that for the approx 150 people at this authentic Thai experience – it was a proper show. I was impressed by the music – giving it energy and that feeling I was at the MGM in Los Vegas. The entrances were nothing like those at WWE but this was in the Boxing Stadium of Chiang Mai and the performers were going for it – nothing was being held back. Even the announcer who commentated the whole way through not giving himself a second to breath. All in Thai. All I could understand was the ooooooo.

The plastic chairs at ring side well I could have been at a UFC fight.  I could have been watching the next world championship – but then again maybe I was. Platforms like this and support that tourists give are crucial for these types of places to survive.

Anything else to add?

Tourists need to keep supporting. Yes, it’s a tourist trap but you will be looked after. It’s packaged in a way that you are picked up – enjoy the event – and then dropped back at your door. How many events do you know would do that type of service and all for £11. You just can’t beat it.

In events we sometimes loose the focus of the consumer. We don’t understand the package that we are offering them to consumer and need to think about realistic things that will keep them happy, ensure they are going to rave about it and know what they got was worth it.

Tonight was worth it. A few practical interesting pointers. The seats. Typical Chiang Mai boxing stadium. Mental Seats with no stairwell. It was challenging to say the least to get up but it was funny to watch people come down. One slip and your off. The other thing was gambling. A wee man. Same build as Charlie’s Chaplin but no hair was walking around with 2 x  100 bhats. He was the local bookie. In the corner sat 5 people nodding to each other. I found it fascinating that it wasn’t as much being hidden and it was part of the event. Everything was just eye opening and I loved it.

UK events we forget the consumer journey instead we take ourselves to seriously with what we do. Enjoy it – create a package that people will want more of…and those that go to the event – consume as much as you can!