First Event…More than an event 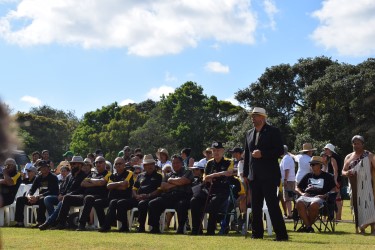 Cultural celebrations are important to remembering groups of society, who makes our society unique and carries through cultural traditional for the future generations of that community and today I was honoured to attend Waitangi Celebrations in Ngati Whatua Orakei Community in Auckland.

Waitangi Day is day that marks the signing of the Treaty of Waitangi in 1840. Representatives of the British Crown and over 500 Maori chiefs signed what is considered to be one of New Zealand’s founding documents.

The national holiday was first declared in 1974 and since then has grown. With this year in 2019 seeing Queenstown holding and organizing Waitangi Day events.

The event had a host of traditions including at the start at 10am when the welcome began. But this was more than a welcome. The raw emotion by those participating was unique and I could feel myself get emotional just watching something was so real and important to them.

The cultural performances include speeches from Maori and Pakeha (European) dignitaries who sat across from each other looking into each others eyes. It was memorizing to witness and experience. I couldn’t take my eyes off of what was being said even although I didn’t understand one word.

The event had so much else happening including food and drink units, traditional cultural stalls some with subtle political messages, sponsor units which include Spec Savers, Physio Clinic and Breast Screening Units. This for me was so important and clever. I was intrigued by the introduction of health and this is strategy by the community was to encourage the rest of the community within the Maori community to be checked out.

The stage went live with some unique and amazing performances, which were welcomed by all in attendance.

Anything else worth discussing?

I loved one thing that I thought was really special and needs to probably be discussed more regarding community ran events. It was the attention paid to sustainability and personal welfare. There opening lines and remarks included the importance of leaving the land, of which they co-own in Auckland in the way they had it found it when they arrived – clean. They had volunteers with rubbish containers who separated all the rubbish, they explained about the strategy but also that last year they were able to recycle 98.5% of the rubbish produced at the event and this year the aim was to achieve 100% – I loved that. I just think that messaging from an event not on a global scale that brings the local community together actually has such an amazing focus and wish other events would have that. And the excuse of “some events would be too busy” I would disagree. Instead focus on the education behind what is trying to be achieved and that aim would be achieved.

They explained about the heat and when peak time would be, they discussed the importance of hydration (WITH LARGE WATER CONTAINERS WITH FREE WATER) and everything else said was so focused on the well being of the spectators that I was – actually not surprised – but in awe. What was brilliant they didn’t charge for anything and instead had an event to celebrate and bring people together. Everything that was participation was free and throughout the day there was constant queues and engagement. The engagement then brings further conversations whether its education regarding eye sight testing or even life insurance, which was one of the biggest participation activations – it works. The event really does work.

One thing to take away from this event…